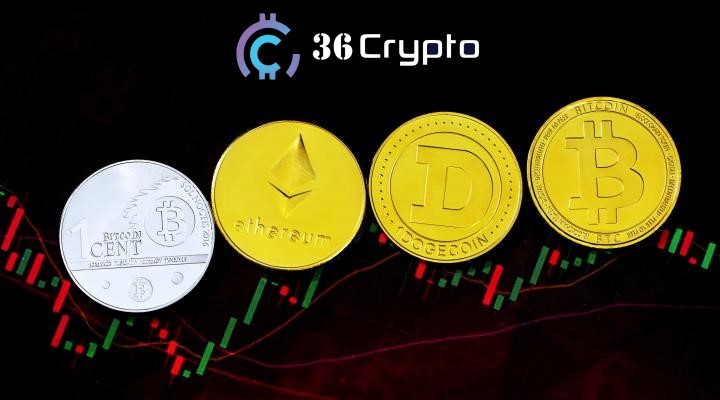 In this article, we have helped make a list of the top 10 cryptocurrencies for August 2022 to assist with your choice of investment.

As the crypto trend continues to gain more momentum, people look to invest and join the train. There are thousands of cryptocurrencies available out there which can make it overwhelming to decide on which one to invest in especially as a beginner.

We have carefully outlined it according to their market capitalization and the current value of the coin. The top 10 list of cryptocurrencies in August includes coins like Bitcoin, Ethereum. Dogecoin, Polkadot, BNB and others. See full list below.

Bitcoin is known as the world’s first and most popular cryptocurrency. It was created in 2009 by someone using the nickname Satoshi Nakamoto. Just like every other cryptocurrency, Bitcoin runs on a blockchain.

Bitcoin has slowly become a household name since its emergence in 2009. There has been a notable increase in the price of volatile assets over the years. In 2016, Bitcoin was sold for $453 and in November 2021, it rose to its all-time-high reaching $68,000.

As of the time of writing this content, Bitcoin is trading at $23,038 and has a market capitalization of over $440 billion.

Known as the second most popular cryptocurrency, Ethereum was created in July 2015 and has since seen tremendous growth. It is a favorite for program developers because of its smart contract and also NFTs.

Many altcoins and other projects that are available today are built on the Ethereum blockchain which gives it good potential to be more valuable in the future. From April 2016 to August 2022, the price has risen from $10 to $1,659 and has a market cap of over $199 billion.

Tether, unlike other cryptocurrencies, isn’t subject to volatility, it is a stablecoin meaning its value is pegged to fiat currencies like U.S dollars, Pounds, and Euros. It keeps a value that is equal to 1 of the above mention fiat currencies.

It is good and favorable to investors who are not ok with the volatility of other cryptocurrencies. Tether was created in 2014 and was first distributed as a realcoin in 2015 over the Bitcoin network. Today, it has a market cap of about $65 billion.

USDC makes it to the fourth position of the top 10 cryptocurrencies in August. Similar to Tether, USDC is also a stablecoin meaning it is also pegged to the U.S dollar, UK Pounds and Euro. It is powered by the Ethereum network and you can also use it to complete transactions globally. It was first launched in September 2018 and has a market cap of over $50 billion today.

The Binance Coin (BNB) is the native coin of the Binance exchange, one of the most popular and largest crypto exchanges in the world in terms of trade volume. It is a form of crypto that you can use to pay for transaction fees on the platform.

Since its launch in 2017, BNB has grown past just being used for payment on the Binance platform. Now it can be used for trading just like other cryptocurrencies and the price has grown since 2017 from around $12 to $284 and has a market cap of $46 billion.

Ripple (XRP) was created by 3 engineers David Schwartz, Jed McCaleb, and Arthur Britto in 2011. XRP launched its ledger in June 2012 and has grown since then.

Solana was developed to help power DeFi (Decentralized Finance). It makes use of Dapps (Decentralized Apps) and also smart contracts. It was created in 2017 by Anatoly Yakovenko.

Solana processes transactions very quickly and securely. Since its launch in 2020, the price has grown from $0.70 to $41 as of the time of writing this post. Solana has a market cap of over $14 billion.

Cardano was launched in 2017 by Charles Hoskinson, the Co-founder of Ethereum. It is popularly known for its early adoption of proof-of-stake validation. This method as opposed to the proof-of-work saves time on transactions and energy usage.

It also works like Ethereum and enables smart contracts and DApps which are powered by its native coin ADA. Since its emergence in 2017, it has had good growth from about $1.9 to an all-time high of $3 in September 2021. Cardano has a market cap of over $14 billion.

According to this post on Linkedin, “Polkadot is a blockchain network being built to enable Web 3.0.” Polkadot is built to use any number of blockchain and integrate them by creating a crypto network that enables various blockchains to work together.

Started as a joke in 2013, Dogecoin has grown and evolved into a well known cryptocurrency in the market. Dogecoin has unlimited number that can be created which leaves it vulnerable to devaluation and inflation as the supply increases.

Disclaimer: This content is in no way a recommendation for investment, rather it is the sole opinion of the writer and is left for you to do with it what you want. Always make your own research before investing in cryptocurrency and have it in mind that cryptocurrencies are volatile assets.

Top 10 Cryptocurrencies to Invest in September 2022

Crypto Staking and How It Works